The Root of the Crisis in State Owned Enterprises 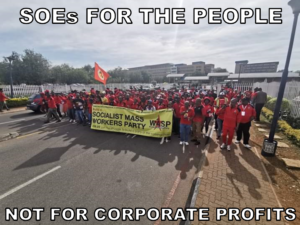 The economy continues to plunge deeper into crisis as it enters yet another recession. For the second time since Ramaphosa’s ascendancy, the economy contracted for two consecutive quarters in the last half of 2019. Major companies like Glencore, Samancor and Telkom have announced that thousands of workers will be retrenched this year while state owned enterprises (SOEs) are reeling from relentless looting and plundering. SAA, Denel, Eskom, Prasa, Transnet and many others are all in a critical state.

Heavily indebted, plagued by maladministration and outright corruption, South Africa’s SOEs are unable to provide even their most basic services effectively. The national power utility, Eskom, is drowning in debt to the tune of R454 billion, while Denel, the state’s armament manufacturer, is owing R2.7 billion. Similarly, the national carrier, SAA, entered into business rescue late last year following a long battle with R12.7 billion owed, despite numerous bailouts by the state. In each of these SOEs, the ordinary workers, who had absolutely nothing to do with their crises, are set to shoulder its burden – job losses are looming! SAA is scheduled to retrench 4600 workers. Eskom is wielding an axe, set to chop and render redundant many workers. The top management at the power utility are trying all sorts of maneuvers to circumvent union resistance. To rid the power utility of “excess workforce”, the top management at Eskom are proposing “voluntary retrenchment packages to non-core employees”. As if that was not enough, Denel, according to its management, is closing its Aeronautics division in an attempt  to return the arms manufacturer to profitability – leaving thousands of workers out to dry.

The spokespersons of the bosses in the mainstream media place the blame for the dire state of SOEs squarely on the shoulders of the Zuma administration – the so-called nine wasted years. Some go so far as to argue that the crisis ravaging SOEs provides ample evidence that only the private sector can efficiently run these entities, and so call for their privatization.

While it is true that rampant corruption and unrepentant looting contributed immensely to the near collapse of these entities, this is not the whole story. What is often not talked about in these celebratory claims of the efficiency of the private sector, is that these SOEs are, in the main, brought to their knees by the selfsame private sector!

Through the inflation of prices of the commodities sold to SOEs; incentive schemes offered by the state in an attempt to woo investment; and exorbitant consultant fees, the parastatals have been left reeling and bleeding cash. In 2013, for instance, Fin24 revealed that Eskom lost R10.7 billion supplying Hillside, the biggest of BHP Billiton’s aluminium  smelters. Through a deal concluded in 1992, BHP Billiton pays only a fraction of what an ordinary consumer pays for electricity. In 2018 major consultancy firms like Mckinsey, Bain & Company and KPMG had to pay back R1 billion to the state following the controversies around the services they provided to the SOEs. Between 2017 and 2018, Transnet, Denel, the SABC, SAA, and Eskom spent a combined R3 billion for consulting and outsourcing of services. Even the former Treasury Chief Director for Governance, Compliance and Monitoring, Solly Tshitangano, admitted that there exists a great deal of “unnecessary outsourcing in SOEs, and a lot of it at inflated prices”.

This all means that the public is in fact subsidizing private corporations. SOEs, in their current configuration, are piggy banks for profiteering by these privately owned industries, corporations and consultancy firms. The working class should not bear the brunt of the failure of SOEs under capitalist rule. We must fight back to stop the era of loadshedding, failing public transport services, and now mass retrenchments and the Corona Crisis. In a united campaign of  workers, communities and the youth, we must embark on a programme of rolling mass action to fight for genuine nationalisation of SOEs under the democratic control of the working class and in the interest of all of society. 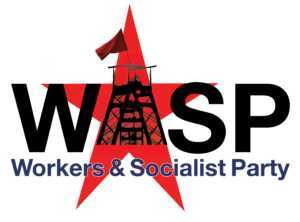